As our LA Memorial Coliseum renovation and expansion project soon comes to a close, ENR California interviews the project team for a look inside the construction process. Read the full article below and at this link: https://www.enr.com/articles/46903-bringing-new-life-to-landmark-la-coliseum 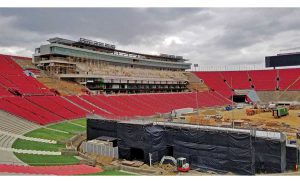 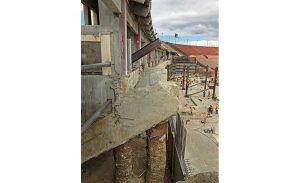 As the $315-million renovation to the nearly 100-year-old Los Angeles Memorial Coliseum heads toward the end zone, more than 400 workers per day are navigating complex logistics and differing as-builts to complete the project in time for the LA Ramsâ€™ preseason game against the Denver Broncos on Aug. 24.

Because of the Coliseumâ€™s location, and the fact that construction has to revolve around two active football teams, the challenges have been amplified, says Jeff Moe, onsite manager of construction for the University of Southern California, which is overseeing the renovation.

â€śWhen working around an active stadium, you find out how complicated and logistically challenging a project like this can be,â€ť says Moe. â€śAnd then add another phase to itâ€”the fact that we have a major league soccer stadium next to us, a $1.2-billion museum going up on our west side, and we are also next to the California Science Center that is constantly open, and this becomes an extremely challenging project.â€ť

DLR Group designed the renovation, and the construction manager is a joint venture of Hathaway Dinwiddie and AECOM.

The project, which broke ground in January of 2018, has been designed to both protect the Coliseumâ€™s landmark status and classic look, while also improving the fan experience.

â€śOne of the most unique aspects of this project is that we are taking a 100-year-old national landmark and bringing it into the modern age,â€ť says Brian Grant, senior associate director of facilities and project management for the LA Memorial Coliseum.

Located in Exposition Park, the Coliseum hosted the 1932 and 1984 Summer Olympic Games as well as two Super Bowls, a World Series and USC home football games since 1923. It was constructed between 1921 and 1923 and was designed by Southern California architects John and Donald Parkinson, who added touches of Egyptian, Spanish and Mediterranean Revival styles. The structure will again host the Olympic Games in 2028.

A major component of the new renovation project is the 252,000-sq-ft Scholarship Tower building. Standing seven stories on the south side of the stadiumâ€™s 50-yard-line, the building will include the Otis Booth Press Box, a rooftop lounge, premium seating, dining options and 24 luxury suites.

While doing demolition to make way for the new tower, crews came across several existing foundations that were â€śconfigured differently and, in many cases, grossly over-poured beyond what was indicated on the as-builts,â€ť says Jeffrey Zunino, senior project manager with AECOM. â€śThis added to the demolition duration and required us to work double shifts to make up the time.â€ť

Moe says the excessive foundations and raker beams were installed by a contractor who came in after the 1994 Northridge earthquake caused severe structural damage to the Coliseum.

Rafi Halajian, assistant project manager for Hathaway Dinwiddie, says â€śsince there was no documentation whatsoever back [in the 1920s], the engineer of record after the 1994 earthquake assumed that all the piles were damaged or insufficient to support the existing structure, so they added additional piles and additional foundation beams.â€ť

While crews were busy demolishing the tower foundations early in the project, other members of the project team were trying to find laydown space, which became extra difficult during football season, when both the LA Rams and the USC Trojan football teams shared the Coliseum field.

â€śWorking through the 2018-2019 football seasons was definitely a challenge,â€ť says Zunino. â€śWe were limited on material laydown area because the footprint of our construction zone had to shrink before each game to allow for adequate egress pathways on game day.â€ť

Moe says the original concept was to use everything outside of the bowl as laydown and storage. â€śBut we soon realized there just wasnâ€™t enough physical space, so we had to take over the football field,â€ť he says. â€śSo last year, at 6 a.m. in the morning, after the Ramsâ€™ last playoff game, we were in here covering up the field. And we did that again this year after the season ended, and it has been a tremendous savings to us.â€ť

Zunino says because of the football games, they also had to limit material deliveries two to three days prior to each game because â€śour main delivery zone was in the same parking lot where broadcast TV trucks staged and set up prior to each game.â€ť

There were also several public safety requirements the project team needed to have in place before football games because the public would be passing through the construction area. These included temporary fire sprinkler coverage, emergency lighting, temporary signage and a temporary fire alarm system.

To make room for journalists to watch games while the new Scholarship Tower was being erected, temporary press box modular buildings were constructed. This led to another unforeseen challenge, says Halajian.

â€śThe city required us to get a temporary certificate of occupancy (TCO) for the press boxes, which we were not anticipating,â€ť says Halajian. â€śThey treated it as an occupied space even though it was temporary for a few games, so we needed to meet requirements for ADA and fire life safety.â€ť He says getting the (TCO) added about a month of extra work to the job, which they made up with overtime hours.

To help make all the different facets of the project fit together accurately, the team is using various software programs such as Autodesk Revit and Navisworks along with a feature in Procore called Coordination Issues that utilizes the 3D model. The MEP subcontractors are using Fabrication CADmep, and the structural steel subcontractor is using Tekla for detailing.

The renovation project, which currently has around 30 different trades per day on site, is about 85% complete and slated to wrap up Aug. 1. Over the course of construction, the job has poured 13,514 cu yd of concrete; used 2,654 tons of rebar and 2,131 tons of structural steel; and exported 47,136 cu yd of dirt.

Crews are currently working on finishes inside the tower building, painting the walkways and tunnels, running new broadcast cabling and continuing the installation of new seats and the WiFi systems beneath them. The job calls for removing all of the Coliseumâ€™s 93,759 seats that were 20 to 30 years old and replacing them with 76,700 cardinal red seats that are more comfortable.