A New Kind of Workplace

In the heart of Silicon Valley, Intuit’s Marine Way Building (MWB) is a new kind of workplace. Intuit has vitally influenced and facilitated people’s financial lives for over three decades with a mission to “power prosperity around the world.” As part of the company’s headquarters, the MWB provides a sustainable, healthy, and interconnected work environment. The four-story, LEED Platinum commercial office building has an array of amenities over its 185,400 square-feet, including one story of below-grade parking, a vast all-hands meeting space, conference rooms, lounges, a café, bike facilities, numerous terraces, and a green roof. Holmes Structures served as the Structural Engineer of Record for this project and worked closely with the design team to bring the owner’s vision to fruition. 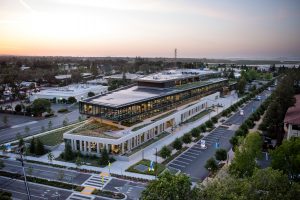 After reviewing numerous structural design options for materiality, a concrete post-tensioned flat slab system was selected for its spanning capabilities, ease and speed of construction, high floor-to-ceiling heights, and future floorplan flexibility. The gravity support of the concrete slabs consists of concrete columns on a mat foundation while the lateral system, designed to a Risk Category of III, is comprised of concrete shear walls and a concrete diaphragm.

Key design challenges were met and solved along the way. One obstacle was realizing the architect’s desire for a flat soffit with large cantilevers on all sides of the building. The perimeter columns were set-back from the edge of the building, creating 12-foot typical cantilevers and providing a main circulation path around the building’s perimeter. At the roof level, slab cantilevers range from 12 to 27 feet and were achieved through post-tensioning and long-term deflection analyses that considered cracked section properties. The flat soffit meant that only upturned beams (where required) were allowed in the building and had to fit within the raised floor depth.

Another structural challenge was engineering an open and interconnected four-story-tall atrium and all-hands meeting space. This space provides a community hub for both the MWB and the Intuit campus at-large, accommodating 500 people. Structurally, it required a 60-foot by 90-foot column-free zone at the first level of the building. As the floor plate steps in at the higher levels, a 90-foot spanning truss supports the upper floors and transfers the loads to the atrium’s perimeter columns. The truss was designed with steel wide flanges encased in concrete. Holmes Structures had to consider the constructability of the truss details as well as construction sequencing to ensure its successful installation. Holmes Structures also engineered a distinct blue feature stair that climbs across the atrium to connect three levels, improving the building’s circulation. Additionally, the firm accommodated discontinuous columns at the first floor with large (four-foot wide, three-foot-deep) transfer beams; these allowed space for the necessary drive aisles below at the basement parking level.

Beyond general structural engineering, Holmes Structures also took an active role in enhancing the project’s sustainability. Since the client had high sustainability goals, the firm used embodied carbon as a metric for design decisions. Once the design team selected a concrete structure, Holmes Structures successfully reduced the concrete’s embodied carbon by 32% (from the NRMCA industry average) through concrete specifications and close collaboration with the contractor and concrete supplier. Maximum savings were achieved in the mat foundation with 50% cement replacement, while the walls and columns yielded 15% cement replacement. Conversations with local concrete suppliers and contractors were paramount to achieving a low embodied carbon concrete mix. These discussions about concrete specifications are worth having as owners, architects, and rating systems increasingly ask for mixes with reduced cement.

The LEED Platinum MWB building is just one part of Intuit’s master plan to update its Mountain View headquarters. The MWB opened in 2016, and Intuit and its employees are ecstatic with their new space. Having met the client’s objectives on the MWB, Holmes Structures and the rest of the design team are engaged for the next phase of campus updates with increased sustainability goals. The team is applying both positive feedback and lessons learned from the MWB, driving momentum forward for Intuit’s next chapter.